Michele is the Transformation, Rewards and Method Director at AB InBev and has been a part of their team for the past 12 years. She says that when she started her first job there, she knew it was the company she had been looking for. “I appreciated the opportunity to work for such a large company where there's a constant change, big challenges, new projects, and, at the same time, you can take ownership as an individual, you're not just one small element in a large group of people, so in that sense, I liked it from day one.” 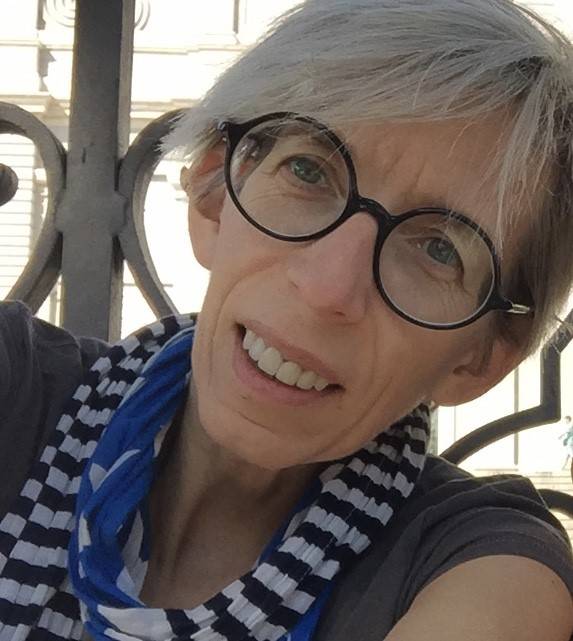 Change has been the only constant in Michele’s career. Michele has worked across different areas of the business, starting in the IT department then moving to their shared service center environment where she was responsible for activities transfer to new locations, such as Prague and Budapest. This took her around the world: she lived for several years in Budapest while also frequently traveling to India. She’s moved across roles and teams, beginning as a manager and is now a senior director. Michele has been able to see both herself and AB InBev grow.

Throughout this journey, she’s always seen AB InBev’s dedication to diversity and inclusion. This has meant she has always been able to be open about who she is and her sexuality and has been able to develop in her career without worrying about discrimination. “As a company, we really make it clear, not only internally but externally, that we are a very open, diverse, and inclusive workplace,” Michele says. “It’s important for us to be outspoken and transparent because, to us, it is all about meritocracy.”

Michele, now based in Belgium, also understands the privilege she has of living in an accepting country. And although she thoroughly enjoys traveling, working in parts of the world where LGBTQ+ identities aren’t as normalized can come with its difficulties.

“If I'm in India, for instance, or other countries where [LGBTQ+ identities] are a little bit less accepted and people ask a question about ‘my husband’, then you have a split second to decide, are you going to play along or are you going to tell the person that it's a different story? It's also a professional environment; you don't want to shock people and you don't want to make people uncomfortable. But at the same time, I decided for myself that I don't want to lie or pretend that I'm somebody that I'm not. And this is something that your heterosexual colleagues don’t think about or know that [LGBTQ+ colleagues] are commonly confronted with.”

As a global organization, however, a company has a responsibility to protect their employees, no matter where they live, and it has a certain power to help create a more equal society across the world. As a leader, Michele believes that open communication is key for line managers in protecting their staff, no matter where they are based. This goes for everyone in a managerial role: if you think your employee might be struggling, it’s key that you're able to speak to them and offer support. “It's about really creating trust, openness, discussion, and trying to listen from all angles,” Michele says. “This way, as a manager, you can be there to bridge any gap there may be with other cultures.”

Another core principle at AB InBev is leading by example. To Michele, this is part of everything she does and part of why it’s important to her to be authentic and visible. She knows that younger people starting their career look to others and to the leaders within their company to see what is possible. This is why having diversity in leadership is vital to show everyone, regardless of who they are, that pathways are open to them. Leading by example also means being open about the struggles and difficulties that come along with life, because they are unavoidable. But the more we understand we’re not alone in this, the easier it gets for everyone. “It’s important when you struggle – and everyone does struggle – that at least you can see that someone else has been able to do it. This can be what you need to hang in there or to have the courage to openly discuss these challenges so that you can resolve them.”

Alongside this, Michele attributes AB InBev’s inclusive culture to the casual nature of their workplace. They’ve purposefully tried to break down the separation between senior and junior staff to create an environment that encourages open communication and collaboration.

“At AB InBev, it's about how you deliver, transform, and engage with people, it is not about how you dress or what you might look like. It's always funny because, if we have new consultants working for us, on their first day they come wearing suits and then on the second day they come wearing jeans and sneakers. But because of our informal dress code, people don't know whether I'm a director or whether I just started my career, we all look equal. We also don't have dedicated offices: myself, my boss, the rest of our VPs sit at the same desks in the open space together with everyone else. It’s important to us that we really try to remove any link to hierarchy.”

Michele has spent over a decade with AB InBev, working across continents and departments. Her dedication to living authentically and speaking honestly will help the next generation of leaders to do the same. But without an organization that she knew would support her regardless of her identity, she may not have been able to grow into the leader she now is. As AB InBev continue to thrive, we’re hopeful that leadership that values honesty, communication, and a breakdown of traditional hierarchies will too. And that the visibility of LGBTQ+ leaders will only increase, as everyone everywhere deserves to see themselves represented across sectors.