With one of the most important Christian holidays, Easter, just around the corner, we looked at discrimination in our culture and wondered how is this injustice consistent with Jesus’ message to love our neighbours as ourselves?

LGBT+ people have long had a difficult and tenuous relationship with religion and religious institutions. All too often these institutions hide behind meaningless rhetoric and ancient texts to justify open discrimination and bald-faced hatred. Churches stand in the way of same-sex marriage, adoption reform, and anti-discrimination laws. The gay rights movement of the 60s and 70s was essentially a push to shift moralities away from those installed by the church. Same-sex relations are still illegal in seventy-four countries around the world today, some still carry the death penalty – with religion almost always the justification. Is it possible, then, with such tumultuous history and ongoing battles across the globe, that the religious community and the LGBT+ community can co-exist?

Before being elected Pope Benedict XVI, Cardinal Joseph Ratzinger was a leader of the chief doctrine office. In 1986, he published the “Letter to the Bishops of the Catholic Church on the Pastoral Care of Homosexual Persons” which describes homosexuality as a “tendency toward an intrinsic moral evil.” While nearly two decades later he wrote that same-sex civil unions were the “approval of deviant behaviour”. The Catholic church maintains that LGBT+ people must be accepted with "respect, compassion, and sensitivity. Every sign of unjust discrimination in their regard should be avoided” (read here), they have also actively campaigned against gay marriage and same-sex parents adopting children. 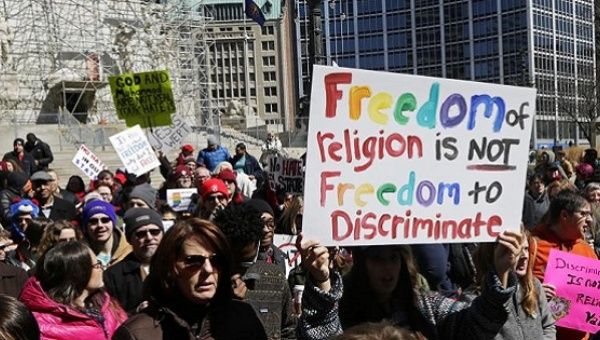 Cases still spring up across the US and the UK where LGBT+ people are discriminated against under the banner of religious freedom. It recently came to light that two foster care agencies in Philadelphia were denying children to homosexual couples on religious grounds. The organisations, Bethany Christian Services and Catholic Social Services, were both receiving massive amounts of state funding to openly discriminate.

This follows a similar situation currently playing out in Texas where a married lesbian couple was denied the chance to foster a refugee child because they don’t “mirror the Holy Family”. They are now being represented by Jamie Gliksberg from Lambda Legal, who said in a statement: “Our clients should be able to walk into any agency and be treated equally. Using religion as an excuse, federal taxpayer dollars are being used to discriminate.” Georgia is also currently reviewing a bill which would allow child welfare organisations to refuse placement of children with LGBT+ couples.

Religious organisations are at least becoming aware of the changing social mores, and that this kind of open discrimination is not as tolerated as it once was. Pope Francis, in his now famous 2013 interview, has said, "A person once asked me, in a provocative manner, if I approved of homosexuality, I replied with another question: 'Tell me: when God looks at a gay person, does he endorse the existence of this person with love, or reject and condemn this person? We must always consider the person." The response, for many, is considered revolutionary. When asked about gay priests at the Vatican he simply responded, "If someone is gay and he searches for the Lord, who am I to judge?"

In the recent same-sex marriage plebiscite undertaken in Australia, the “No” campaign was vehemently lead by the Australian Christian Lobby, yet a recent study found that over 40 percent of same-sex couples in the country were Christian. The Conversation investigated this, interviewing a variety of religious leaders and followers across several different dominations of Christianity in the country. They found a familiar rhetoric from everyone they talked to: that these churches were “welcoming, but not affirming” of LGBT+ people. That they welcomed LGBT+ people into their churches, but that they could not affirm, or encourage, their sexual orientation. This essentially allows gay people into the congregation, but not into volunteer positions within the church. “At the moment our position is that if you’re going to volunteer here that we would hold to a fairly orthodox position of scripture,” one pastor said. “So yeah, we do have a line, and that line is drawn at volunteering.” 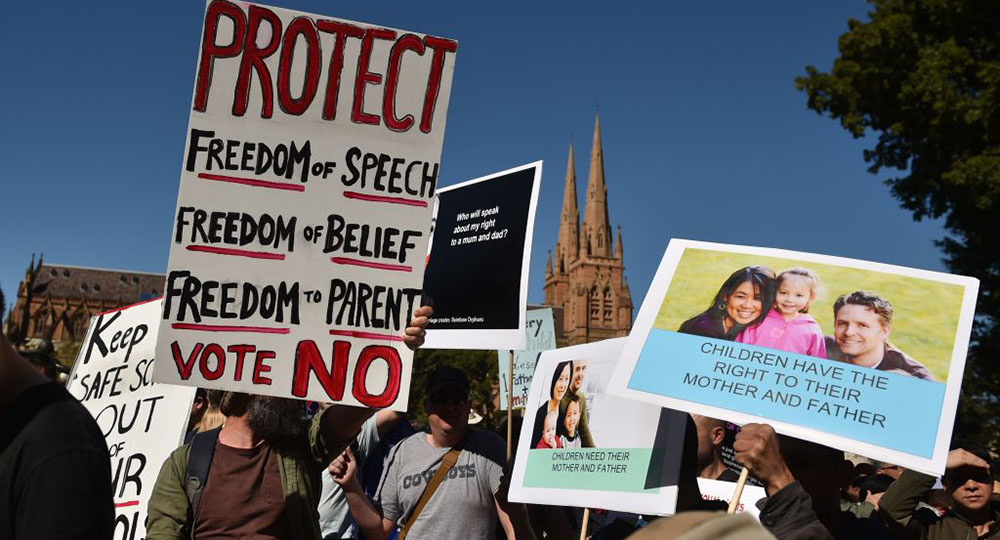 Volunteering is an important first step towards positions of greater power and influence within the church. Forbidding LGBT+ people from volunteering means there won’t be any LGBT+ leaders further down the line. This isn’t just at the volunteering level either, one pastor described a former leader in their church who had to step down because she took a same-sex partner, “It’s so sad because, for her, it’s her space of belonging. All her formation happened there.”

A gay member of one of these congregations described their experience with the religious community: “There really is no self-respect in staying inside a community that holds up a banner saying, ‘welcome home’, while simultaneously rejecting your very presence by silence. The silence was like thunder to me.”

A few years ago, Stonewall, the UK LGBT+ organisation, launched a program to directly challenge the idea that LGBT+ people have no place in religion. The program was called “Faith Role Models” and collected representatives from 36 different religious communities – ranging from the Church of England, Catholicism, Hinduism, Islam, Sikhism, Judaism and Buddhism. These representatives sought to start a conversation about equality and to dispel harmful myths about LGBT+ people.

"There is a common misconception that being LGBT and having faith are mutually exclusive, that faith communities are exclusively homophobic and that LGBT people do not participate in faith groups or attend places of worship,” Dominic Arnall, Head of Projects and Programs at Stonewall, explained. “Faith Role Models brought together 36 LGBT people from different faiths, backgrounds, and ethnicities from across the spectrum of LGBT identities. It was an inspiring and uplifting experience to see a group of LGBT people determined to challenge stereotypes. We’re here to support LGBT people to stay connected with their faith communities."

Luke Dowding, a 29-year-old administration and business manager, was one such representative. He wanted to fight against the stigma of being a gay Christian. “I am no more gay than I am a Christian, no more a Christian than I am gay,” he said. “I would say that the biggest misconception is that you can’t be both LGBT and of faith, that they are mutually exclusive.”

Dowding emphasized that the church can be “a safe, inclusive and affirming place for all – particularly regardless of sexuality or gender identity.” He wants to be a Minister in the Baptist Union of Great Britain someday, even though he understands that is currently denied to him. “The Church still has a long way to go before I can hold my hands up and honestly say that I am treated as an equal,” he said, “for the most part I continue to be amazed by how inclusive those of faith can be. It’s almost as if that’s central to the message of Christianity.”

It is important to remember that religion, like the LGBT+ community, is made up of a myriad of altogether unique and individual people. Religion, in many ways, is a tool of society. A tool is not good or bad by its nature, a tool is wholly dependent on who wields it. Religious institutions have been responsible for tremendous hurt in the world, but they have also brought people together, taught love and acceptance.

Attitudes towards LGBT+ people have changed drastically over the last century, even more so over the last few decades. Religious institutions, by their nature, cling to the past and old traditions. As society changes around these institutions at a relatively fast pace these organisations are slow and reluctant to keep up, but they do keep up. A study by the University of Leicester found that religious people opposing sexual relations between two adults of the same gender has fallen from around 80 percent in 1983 to around 20 percent in 2013 (read here). LGBT+ people, like those in Faith Role Models program, are instrumental to this change. Gay people who refuse to let their spirituality and sexual orientation be separated.

As those that guide religious intuitions change and reform their views, acceptance and tolerance for the LGBT+ community becomes increasingly inevitable. We just have a bit longer to go.

SIGN UP to myGwork, the global networking and recruitment hub for LGBTI professionals and graduates