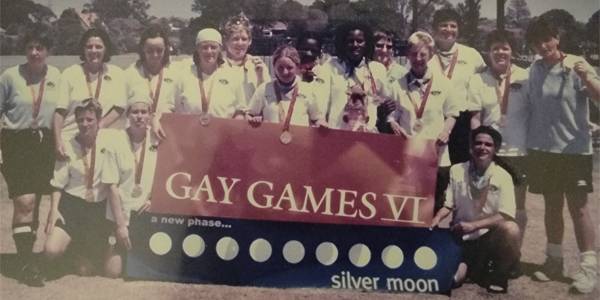 Joanie Evans is a hugely influential figure in LGBTQ+ sports. Not only was she an influential member of trailblazing lesbian team, Hackney Women’s Football Club ­– the first open and out gay team in Europe – but she is also the co-president of the Federation of the Gay Games, dating back to 2014. In fact, she’s probably one of the longest serving co-presidents who has been there for 4 terms (8 years). She was also the only Black woman on the Federation of the Gay Games board until 2017; now there are 2 under her leadership.

Her main goal, both on the football pitch and in the Gay Games, is to create an open and inclusive playing field for all, particularly for women, regardless of how they identify. She has successfully done that in football in the UK. Joanie was one of the original founders of the Hackney Women’s Football Club, Europe’s first out lesbian football team, back in 1986. The team made their first debut at the Gay Games in 1994 in New York, which attracted over 14,000 people. She is also a Gay Games medalist, winning a gold medal with the Amhurst Aztecs in the 2002 Gay Games in Sydney, Australia. The team was made up of women from the UK, New Zealand, and Italy.

Originally from Birmingham, Joanie ran for her school and for the West Midlands as a teenager. But looking back she acknowledges that she wasn’t given the same opportunities as her male peers. “One of my male friends went on to run for one of the UK’s top clubs and then competed in the Commonwealth Games representing England. But as a girl, I just wasn’t given the same opportunities,” she recalled. “I loved to play football with my brothers. But I actually didn’t play for a team until adult life, as I didn’t actually know there were any women’s football teams out there.”

It wasn’t until about the time she came out, at the age of 25, that a friend told her about women’s football teams. Shortly after, in 1989, she joined Hackney Women’s Football Club, a predominantly lesbian team. “As a team we were always open about our sexuality, despite the abuse we received,” she highlighted. “It wasn’t easy as we were in the middle of the AIDS crisis. Even as lesbians we felt like we were being targeted, and the discrimination didn’t just come from the sidelines. When I started to play football, a top player told me I couldn’t show that I was a lesbian because it would set women’s football back 20 years. That’s despite the fact that women who played a male dominated sport were perceived to be lesbian.” 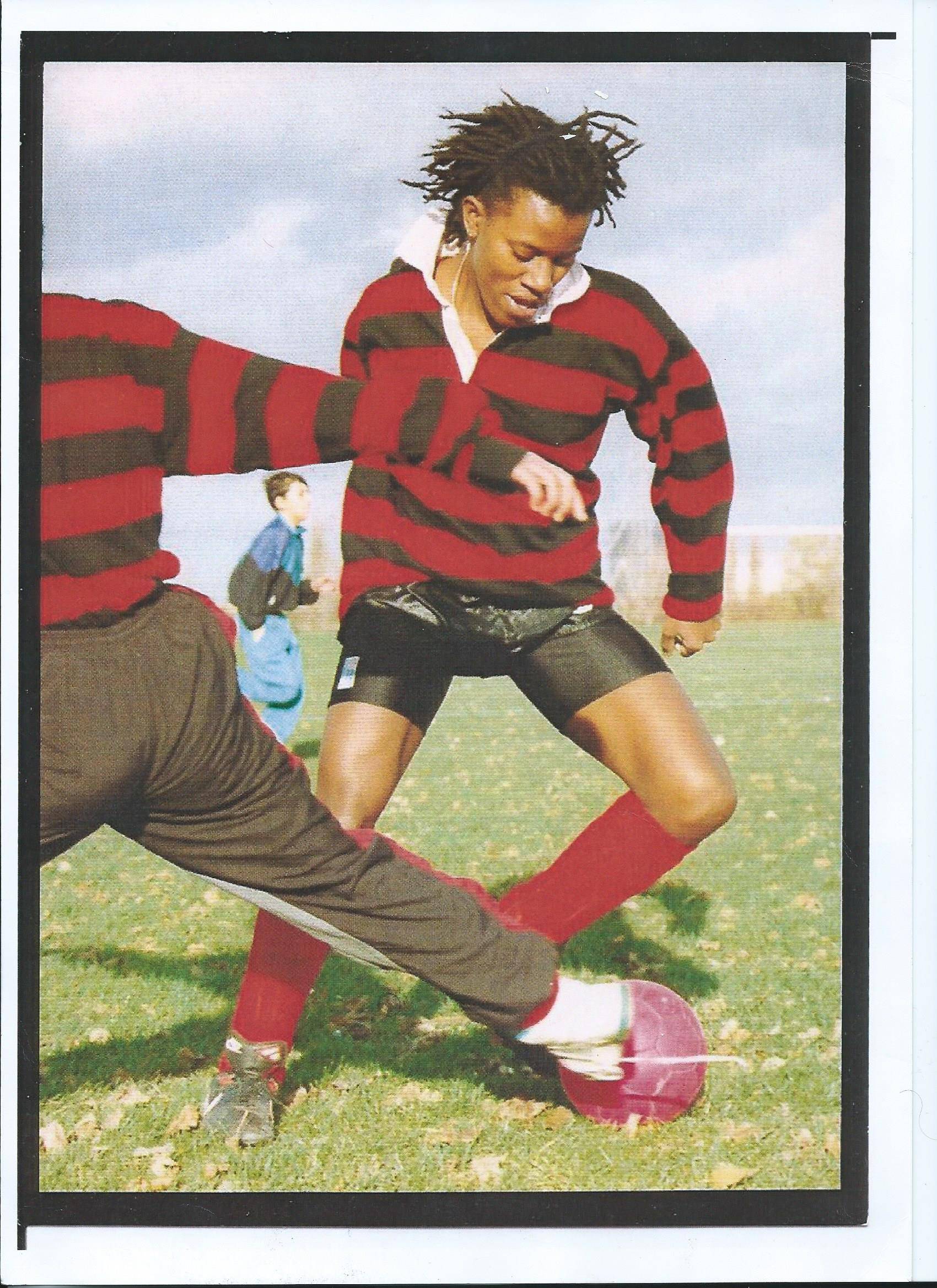 Together with Hackney Women’s FC, Joanie fought discrimination battles on and off the pitch. “Even the football league tried to bring a case against us for bringing the league into disrepute, accusing us of influencing young girls, simply because of the fact we were an openly gay team,” she highlighted. “Of course, we fought back, and the league was found to be in the wrong. It was a huge win for us. Being out and authentic ourselves meant that we played better football, which resulted in many wins, putting the team on the map for women’s football.”

Joanie believes her team set the precedent for women’s football today. Thankfully, as a result of role models like her in sport who were not afraid to speak out and be out and open about their sexuality and the discrimination they faced, things are changing. Over the years, Joanie has participated in documentary films as well as other media platforms, raising awareness of homophobia in sports. As a result, more out LGBTQ+ role models are now speaking out to level the playing field for women and LGBTQ+ people in sports. A lot of that success can be attributed to Hackney Women’s FC, thanks to Joanie and her team mates. “But out LGBTQ+ role models, however, are still rare in men’s sports, like football, so we still have some way to go to overcome discrimination and achieve LGBTQ+ equality in sports,” she highlighted.

After being a player for many years, Joanie went on to be a coach at Hackney Women’s FC. She also was the diversity and inclusion director of the Federation for Gay Games. Then, eight years ago, she was invited to become the co-chair of the Gay Games; a role she does alongside her paid job as a legal advisor at London’s Law Centre. She now has set her sights on changing attitudes and achieving more equality on the global playing field. “The Gay Games is hugely relevant because there’ll always be a community that is not being represented on the global screen.”

Following the success of the 2018 Gay Games in Paris, her focus is now on the next event, which will be hosted in Asia for the first time. She is currently busy working on the 2023 Gay Games in Hong Kong, with Mexico’s Guadalajara as the presumptive co-host, as reported. The next one will be her eighth Gay Games to date (which happen every four years) and the third one that she’ll be attending as Co-president 2023 – her first was in Cleveland/Akron (in 2014) and then Paris (in 2018).

The 2023 games have been delayed a few times because of the pandemic. “There's a lot of excitement being built up about the Hong Kong games as it’s the first time the Gay Games will be held in Asia,” Joanie confirmed. “If there's a country that knows how to deal with a pandemic, it's Hong Kong.”

Things are slowly coming along in terms of LGBTQ+ inclusion in China and in Asia. “We hope the games will be a catalyst for bigger change in Hong Kong and China overall. We know that wherever the games have previously been, it's made a massive difference to the community, often resulting in more LGBTQ+ centers as well as more visibility, awareness and acceptance,” confirmed Joanie. Her advice to LGBTQ+ individuals who want to pursue sports is to simply go for it: “There is more hope and opportunity now than there has ever been, and there are so many opportunities for young women to play football and participate in other sports.” 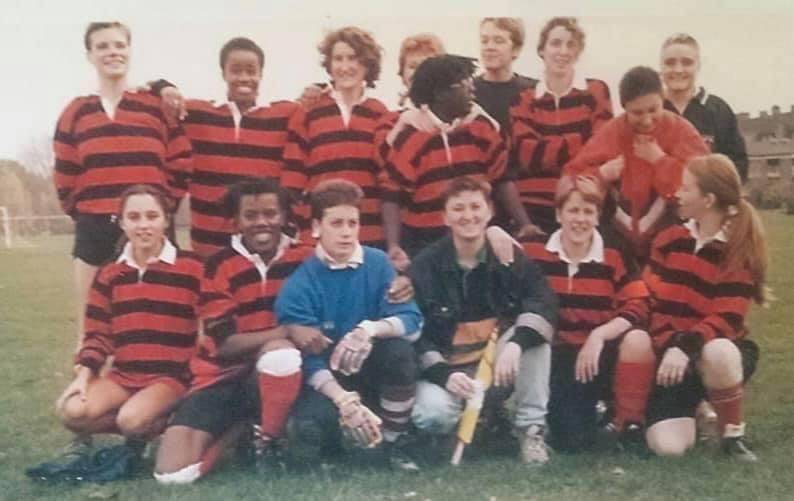 She admits coming out and being open and out is still not easy for both aspiring and seasoned sporting professionals: “But it's not as hard as it was. Of course, it's now easier for women to be out in sports, and we really need more men to come out, especially in sports like football.”

But thanks to players like Joanie and, of course, the founder of the Gay Games, Dr. Tom Waddell, things are changing. She is determined to provide inclusive opportunities in sports and wants to let people around the world know that the Gay Games are out there for the LGBTQ+ community and allies. “I want to encourage people of all ages to come to our games and compete. The Gay Games are open playing field for anyone interested in sports, whether you identify as LGBTQ+ or an ally,” she concluded. “It's also the Gay Games’ 40th anniversary next year, so there are a lot of celebrations to look forward to.”

Joanie Evans is speaking at WorkPride 2022, alongside former professional swimming champion Michael Gunning. Click here to sign up for free.