A far-right Christian group has been accused of offering conversion therapy to minors in the US, in areas where the barbaric practice has been made illegal.

Focus on the Family is a fundamentalist far-right Christian group founded in 1977, which has relentlessly lobbied against LGBTQ+ rights.

The group runs a program called the Christian Counselors Network, a search engine for Christian therapists across the US. Each therapist included is required to be “licensed as a mental health professional in the state where he or she practices,” and to align with Focus on the Family’s values.

These “values” include that “God created humans… intentionally and immutably male and female,” that “sexuality is a glorious gift from God to be offered back to him either in marriage for procreation, union, and mutual delight or in celibacy for undivided devotion to Christ,” and that “regulatory bans against helping youth in any manner that does not comply with LGBT values and identity” are putting “religious freedoms sacred to families and American life, client autonomy, individual wellbeing and parental rights” at stake. 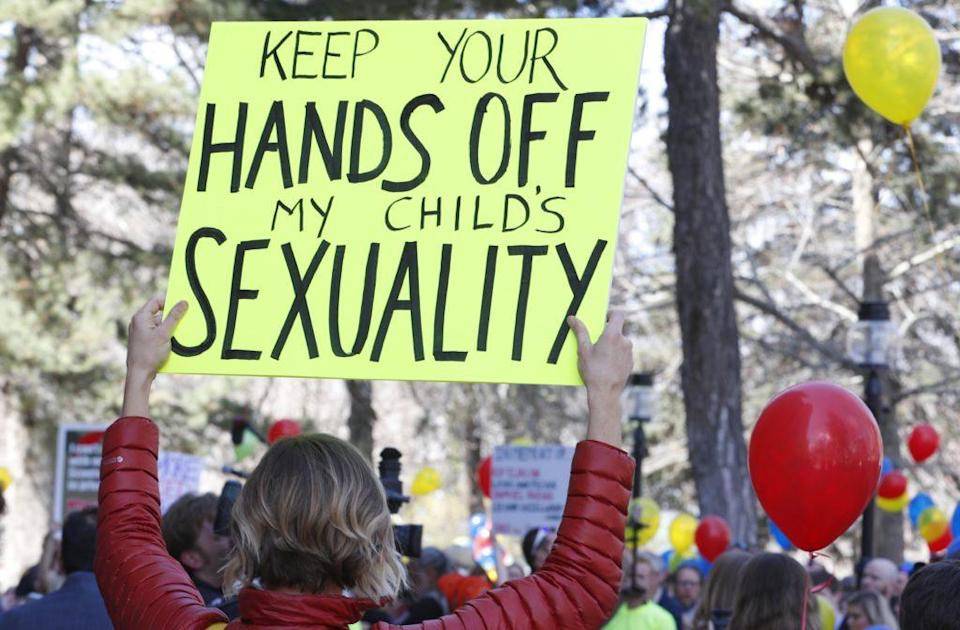 According to Yahoo! News, there are currently 20 US states which ban all conversion therapy on minors, and a further three which ban the debunked practice, often compared to torture, by therapists or organizations with federal funding.

In an undercover investigation, an openDemocracy reporter posed as a 17-year-old lesbian and approached two therapists who were found through the Focus on the Family search engine and were working in states in which conversion therapy is illegal, calling into question the effectiveness of the bans.

Both therapists advised the reporter to “suppress” her sexuality. One, based in Virginia, told her that LGBTQ+ people were “unhealthy,” adding: “The suicide rate is considerably higher than the national average […] The sexual assault rate, the crime rate, all that is higher.

The Virginia-based counselor had listed himself on Focus on the Family’s search engine as being based in another state, and advised the reporter to stop eating until she saw herself “at the Cross with Christ […] hanging, dying, bleeding” because “that’s life-changing.”

According to openDemocracy, he also told the reporter than lesbians have 500 partners on average and gay men have 1,000.

Another therapist, this time based in Colorado, said he could help the reporter with “unwanted same-sex attraction,” but offered “coaching” sessions, rather than counseling, a service that is far less regulated.

He also advised her to only “talk to God” about her feelings, rather than friends and family.

“God’s issues are not going to come up because he doesn’t have any,” he told the reporter.

“Other people, their issues, will come up and that’s going to be hard to manage. So there will be a place and a time for that, but, right now, start with you and God.”

Shannon Minter, legal director of the National Center for Lesbian Rights, told openDemocracy that its findings had revealed “graphic” examples of conversion therapy, and also highlighted how practitioners side-step the issue, rarely telling clients: “You’re gay, and I’m going to change this.”

New York lawyer Lisa Linsky added that those practicing conversion therapy often “phrase things in such a way that you don’t ever see the term ‘conversion therapy’ […] They have gotten much more sophisticated and surreptitious in the ways they bring young people in to change them […] and that’s scary.”

According to Focus on the Family’s Christian Counselors Network search engine, it also advertises therapists specializing in “homosexual issues” and working with minors in three other states with conversion therapy bans: California, Maryland, and New York.

While bans on are, of course, a positive step, the investigation shows that they are not the complete solution to ending conversion therapy, especially if they are not properly enforced.

Amie Bishop, of OutRight International, explained that “bans, alone, will not suffice to end so-called conversion therapy”, and said the practitioners will target vulnerable LGBTQ+ people until the queer community is “fully embraced by their families, their faiths, and their communities.”

Focus on the Family has been contacted for comment.