George Kalamitsis and his colleagues at the Hellenic Liver Patients Association (Prometheus) have come up with an innovative model for addressing hepatitis C virus (HCV), specifically screening and linkage to care for people who use intravenous drugs in Athens.

Participants are selected using a method called respondent-driven sampling (RDS), which can be helpful in engaging hard-to-reach populations, such as individuals who use drugs. The initial participants receive RDS vouchers with which they can recruit three additional people who are without housing and use drugs by giving them vouchers to start the program. Those participants are also given three additional vouchers to pass on.

The program includes a questionnaire and blood sample test, both of which are anonymous and confidential.

“This program is unique because it is a community-based program in Athens offering holistic health services without bureaucracy and also because it is driven by its own beneficiaries,” says George, who is a founding member and chair of the organization. “The network of peers being activated contributes to the success of the program.”

George and his team currently co-administer the program called, ARISTOTLE HCV-HIV II, with a local academic research organization and community health partners. ARISTOTLE HCV-HIV II is just one example of innovative methods Prometheus uses to seek, test, treat and retain people living with or at risk of acquiring HCV and HIV.

George, who several years ago was cured of HCV himself, says unique approaches are needed to engage with hard-to-reach populations.

George says people in vulnerable situations feel more relaxed when members of the Prometheus team reach out in person. A key element of the program is a van that is driven around the city to reach out to people who inject drugs to offer testing, counseling, contraceptives and clean syringes for prevention. The Prometheus staff can also help those who test positive initiate and maintain treatment.

“We pick healthcare workers who can address the fears of the people they are trying to reach, speak to them with empathy and understand how they feel about the situation,” he says. “The person guides them through the cascade of care.”

Through the program, more than 1,300 people have been screened and almost 400 people were identified as having HCV and linked to care.

Gilead has supported ARISTOTLE HCV-HIV II since 2019 through the company’s COMMIT community grants program, which provides funding to organizations working on projects focused on the elimination of HCV. Prometheus is also a Gilead CARES grantee and has received support for losses due to the COVID-19 pandemic. Gilead CARES committed $20 million to nonprofit groups facing an imminent closure or termination of vital services due to the pandemic. 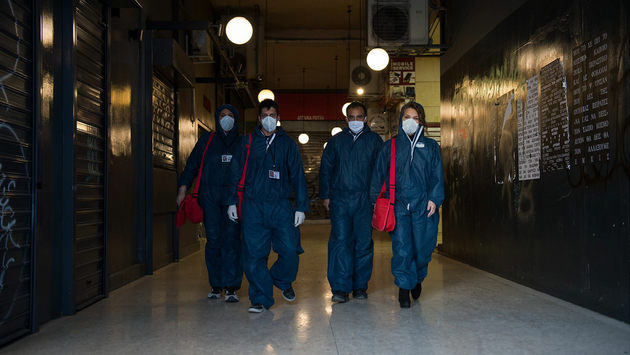 George (second from right) and his team at Prometheus continue to work in the community during the COVID-19 pandemic.

ARISTOTLE HCV-HIV II worked to ensure limited interruptions to its services during the COVID-19 pandemic. While the program continued to provide vital services to people who inject drugs living on the streets, pressure was rising to get people indoors. Athens eventually opened a shelter for 400 unhoused people, and, two blocks away, another specifically for people who inject drugs.

In addition to providing basic services Prometheus is helping to ensure that people who reside there are tested for HIV and HCV, and, if necessary, linked to care.

Prometheus also partnered with another nonprofit organization called Positive Voice to introduce a series of on-site interventions called Streetwork Project in downtown Athens and Thessaloniki. The project provides food to people living on the street as well as safer means of injecting for people who use drugs.

While the pandemic has taken a toll on vulnerable populations in Greece, George says he hopes the collaborative spirit to help hard-to-reach populations at risk for HCV and HIV will carry on beyond the public health crisis.

“The COVID-19 pandemic has brought a lot of collaboration between civil society, government, public organizations and even the police,” he says. “We all sat at the table to cooperate for the first time.”