After becoming the queen of hearts during their run on ‘RuPaul's Drag Race U.K.’ series two — they not only became a finalist and favourite to win, but also was named Miss Congeniality by their fellow queens — Bimini Bon Boulash has been releasing announcement after announcement. The drag star has done quite a number of photoshoots, has announced a book, signed on to a public relations firm, and more. Now, they are announcing that they have been signed to Next Models in London.

“Never in my wildest dreams would I have ever thought this possible,” Boulash wrote to Twitter, posting a photo from inside the agency. “This opportunity is a huge crazy, mind-blowing moment for my gender-non comforting a*s and to top it all off they have signed me to the management's main booking list rather than special bookings.” 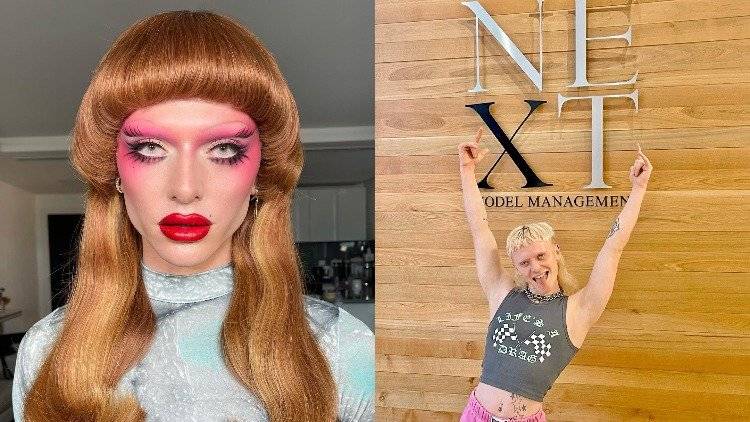 True to their word, Boulash appears on the women's board as a model as opposed to being marketed as “talent,” “artist,” or “special bookings.”

"This is huge for non-binary representation in fashion and I’m so thankful that want to take this chance with me!!” they wrote to Twitter. It makes sense given that they just shot for British Vogue.

Boulash is the latest to follow in a pipeline originated by Miss Fame. In 2016, they became the first drag performer represented by a major modelling agency on the women's board when they were signed to IMG Paris. At the time, the agency helped negotiate Fame's contract with L'Oreal Paris after they first connected with the brand during a Cannes Film Festival appearance. They were later followed at IMG by Aquaria. Fame has also been signed to Wilhelmina Models as well as Supreme Models.

The nonbinary performer always had a deep connection to fashion. Even on their season of ‘Drag Race’, Miss Fame criticised for being a look queen. In a prescient scene, they told some of their competitors “Some of our aspirations are not to be at the club for the rest of our career!” They stopped performing in May 2017 and have arguably become one of the show's preeminent look queens shooting for multiple iterations of Vogue.

According to ‘Out’, in March 2020, Fame announced that they left IMG Models.

“After being told to be patient year after year, my press kits I curated after every show run not being utilized at all, no paid work for the entirety of my contract (2015-2020), texts not being replied [to] or met with blatant disregard to my numerous visits to the agency, I realized the prestige of having their title above me was not worth its weight,” they wrote on Instagram Stories. They went on alleging they were mismanaged by IMG and would continue on with Supreme.

Other queens have also been signed to agencies: Pearl signed to Wilhelmina and Milk signed with Q while Gigi Goode and Naomi Smalls are both represented by One Management.