The Bank of England has unveiled the new £50 note featuring mathematician and computer science pioneer Alan Turing, who helped the Allies win World War II with his code-breaking prowess but died an outcast after facing government persecution over his homosexuality.

The bank revealed the note's design and features — which include a number of clever visual references to Turing's work — on Thursday, nearly two years after first announcing that it would honour Turing. The banknote will officially enter circulation on June 23rd, Turing's birthday. 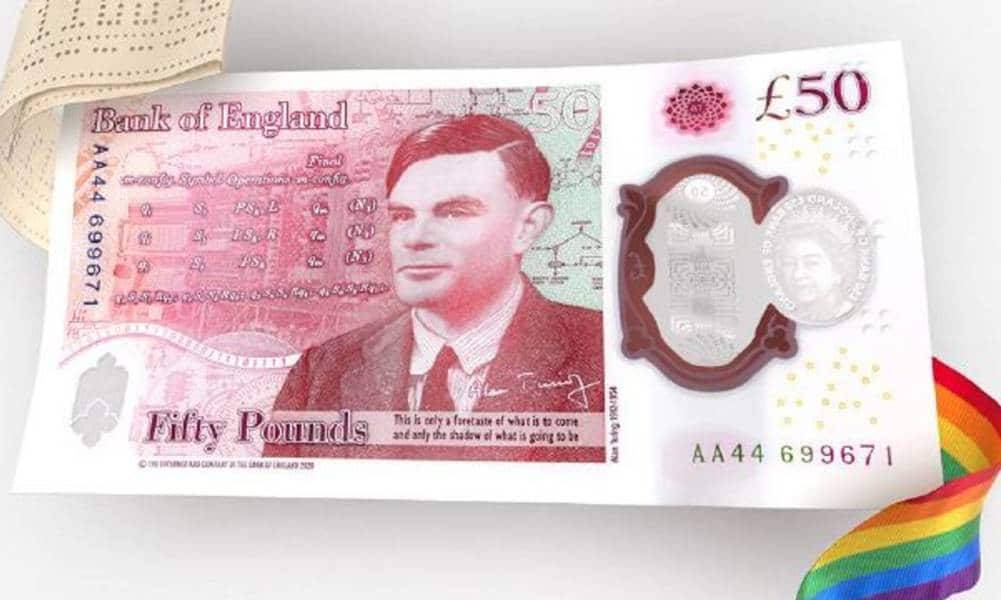 Andrew Bailey, the governor of the Bank of England, noted in prepared remarks that Turing is arguably best known for his code-breaking work, which historians credit with shortening World War II by about two years and saving millions of lives. But far beyond that, he said, Turing's pioneering work in computing and artificial intelligence “has had an enormous impact on how we all live today.”

“Alan Turing was a gay man, whose transformational work in the fields of computer science, codebreaking, and developmental biology, was still not enough to spare him the appalling treatment to which he was subjected,” Bailey said. “By placing him on this new £50 banknote, we celebrate him for his achievements, and the values he symbolises, for which we can all be very proud.”

Instead of paper, the new note is made from polymer, which is longer-lasting and harder to counterfeit. It completes the bank's “family” of polymer banknotes, Bailey said, joining the Winston Churchill £5, Jane Austen £10 and J.M.W. Turner £20.

The note itself features an image of Turing and his signature as it appeared in a 1947 visitor's sign-in book on display at Bletchley Park Trust, where he worked during the war. It includes a quotation, taken from a 1949 interview in which Turing was speaking about his ground-breaking Pilot ACE machine, one of the world's first computers: “This is only a foretaste of what is to come and only the shadow of what is going to be.”

“He has turned out to be prophetic,” Bailey said.

Symbolic designs on the note include a mathematical table and formulae from Turing's 1936 paper ‘On Computable Numbers, with an application to the Entscheidungsproblem,’ technical drawings of the British Bombe code-breaking machine and ticker tape depicting his birth date in binary code.

As ‘NPR’ reports, a sunflower-shaped foil patch, containing the initials ‘AT’, represents Turing's work in morphogenetics, a branch of developmental biology focused on the algorithms behind patterns occurring in nature. It's another scientific field for which Turing helped lay the groundwork, Bailey noted.

“From his sheer force of will, came enormous leaps of progress,” he said. “Perhaps it is because we now find ourselves confronted by a pandemic and climate change, and relying greatly on original thought, and scientific innovation, that Turing's values and achievements resonate so strongly with us today.”

Turing's selection began with an open call for members of the general public to nominate scientists they would like to see on the new banknote, which Bailey said got nearly 250,000 responses. The Banknote Character Advisory Committee narrowed down some 1,000 unique nominations to a shortlist of 12, ultimately choosing Turing over contenders including Rosalind Franklin, Ada Lovelace and Stephen Hawking.

Dermot Turing said in a video released Thursday that his family was "thrilled and delighted" to see his uncle honored in this way, particularly for his work in computer science — which he said he thinks he would have wanted to be remembered for above all else.

“I think Alan Turing would have wanted us to think about things like underrepresentation of women is science subjects, underrepresentation of Black and ethnic minority kids in STEM subjects at school, and why they're not being given the opportunities that they should have and why that's bad for all of us,” he told the BBC. “These were things I think he was very keen on in his lifetime, and I'm delighted that the Bank of England, in their choice of imagery on the bank note, decided not to major up on code-breaking and to focus on Alan Turing as a figure in computer science.”

It's the latest in a series of relatively recent efforts to honour Turing, who remained far from a household name for many decades after his 1954 death, both because of secrecy surrounding his computer research and social taboos about his sexuality. Turing's story, and legacy, gained more mainstream attention following the release of historical drama film ‘The Imitation Game’ in 2014.

Turing reportedly made no secret of his sexuality, even though being gay was cause for prosecution under U.K. law that remained on the books until 1967.

Turing was convicted of homosexuality under “gross indecency” laws in 1952, after police learned of his relationship with another man. He was stripped of his security clearance, subjected to monitoring and forced to take estrogen shots to neutralise his sex drive — a process deemed “chemical castration” — in order to avoid a two-year prison term. Turing's death from cyanide poisoning at age 41 was officially ruled a suicide.

“His contributions to Britain's war effort and its scientific status, make the circumstances of his own death all the more poignant,” Bailey said.

Queen Elizabeth issued a posthumous pardon for Turing in 2013. Three years later, the U.K. justice minister pardoned thousands of gay men convicted under gross indecency laws. And a portion of a 2017 law, named informally after Turing, pardons all men who were convicted based on their sexuality.

Jeremy Fleming, director of the Government Communications Headquarters, said in a statement that Turing's appearance on the new banknote celebrates his scientific genius and “confirms his status as one of the most iconic LGBT+ figures in the world.”

“Turing was embraced for his brilliance and persecuted for being gay,” Fleming said. “His legacy is a reminder of the value of embracing all aspects of diversity, but also the work we still need to do to become truly inclusive.”

Viking Warrior Given A Hero’s Burial May “Have Been Transgender ... Or non-Binary, Or Gender Fluid”