The Glasgow music industry is getting bigger and stronger day by day. With a consequent underground community, the city is starting to welcome an array of LGBTQ+ talent within its cultural scene.

Joesef is a 26-year-old Glaswegian who has been bringing his sad boy vibes to the very grunge environment that invades the Scottish city. With his charming but honest voice over instrumentals between lo-fi and pop, Joesef’s music is for everyone. From summertime sadness playlists to relatable queer songs, the singer brings everyone together with an effective sentimental sound.

As well as the viral Lewis Capaldi, Joesef sold out his debut gig in 2019 at King Tut’s before releasing any music. And it’s only become bigger for him.

Joesef has been a publicly proud bisexual since he came out in 2020. Laurine Payet from myGwork talked to the singer after his performance at the London festival All Points East about his queerness and its impact on his artistic world and community in Glasgow. 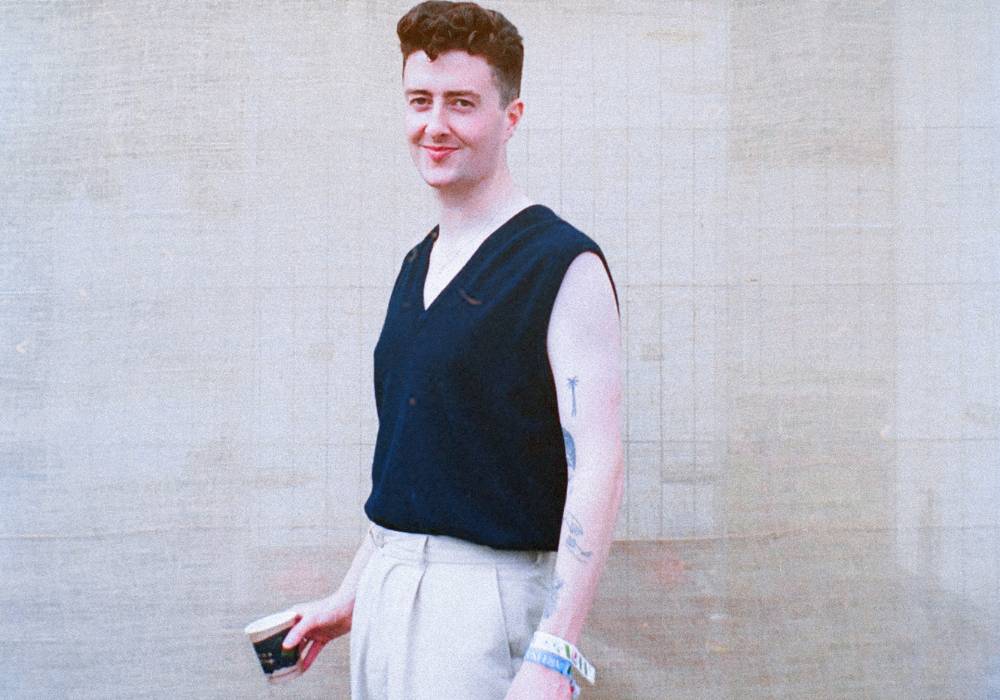 “It’s just being honest about my life to the public eye. I feel like being queer is so much more exciting than not.”

For Joesef, queer love happens to him and he will write about it. That is simply how being bisexual influences his music and creativity as a whole, and he is proud of it. Honesty is for him the most important side of his work. Being friends with peers who are also part of the community is also a major influence for the songwriter. The artist wants to write to express what it is like to be Joesef and for him being straight is boring. He is thankful for the difference in backgrounds and stories his friends are made of, being influenced by the fact they have grown up as queer individuals.

“There’s a very strong toxic masculinity environment in Glasgow and it’s hard to be from that. I feel like if any young boy from there can see themselves in me, it’s good.”

Joesef comes from the East End of Glasgow. In what he defines as a rough area, the singer talks about the energy full of toxic masculinity reigning. Joesef finds fulfilment when Scottish queer people see themselves in his story and can feel as though they are a part of something. As much as Glasgow is becoming a lot more queer-friendly, being included in the community is a hard thing to feel. Getting messages and hearing stories along those lines is part of the pleasure and pride he gets off being an LGBTQ+ Scottish musician.

As well as Joesef, a lot of queer talents are getting attention in Glasgow. Sadly, 2021 saw the loss of one of the biggest role models for young artists in the transgender community. Sophie was the Glaswegian icon of hyperpop and left behind her a succession of queer talent in town who were influenced by her unapologetic self.

Vintage and fresh, feminine and masculine, Walt Disco is leading the way to the top. Fronted by a gender non-conforming singer, the sound and aesthetic of Walt Disco is highly inspired by the iconic Rocky Horror Picture Show. Reinventing vintage pop with the influence of post-punk, Walt Disco is the sound shaking up their genre. They followed the steps of every musical act in Scotland, also playing King Tut’s venue numerous times. Their debut EP “Young, Hard and Handsome” was – not surprisingly - named after vintage gay porn. The release brought the six-piece band a wave of acclaiming critics and a settled spot in the bands to watch out for in the UK music scene.

Free Love is also giving a fresh touch to the Scottish music catalogue. The duo composed of Suzanne Roden and Lewis Cook is a dance-pop experimentation that they decided to take to the next level with the release of their debut album “Luxury Hits” in 2018. Using a multitude of electronic musical techniques, with an airy production and songs in both French and English, Free Love is manifesting chaos and party to come out of their music. Their uncanny remix of Charlotte Gainsbourg and Django Django’s ‘Waking Up’ is the proof Free Love are able to bring their signature to any song.

Glasgow has, for a long time now, been one of the leading places for UK music, and is where most musical events happen in Scotland. The city is also becoming the home to a vast range of genres when it comes to queer artists making music. From electronic music to underground post-punk bands, there is space for everyone to express their creativity in Glasgow. As Joesef said, queer talents being pushed forwards is creating role models for those who struggle to find their place as queer individuals, a vital point in a community.

You can find more queer talents from the Glasgow scene on the official Spotify playlist PRIDE: Glasgow.