The long-running cartoon series ‘The Simpsons’ has recast the voice actor for the iconic gay character Julio with gay, Cuban actor Tony Rodríguez.

The recasting follows the controversy of ‘The Simpsons’ voice actor Hank Azaria’s stereotypical depiction of Indian-American convenience store clerk Apu. The controversy sparked a conversation that some of the show’s ethnic minority characters had been historically voiced by white actors and encouraged harmful stereotypes. ‘The Simpsons’ creator Matt Groening told the BBC in February that “times change”, and the show would be rethinking its casting. 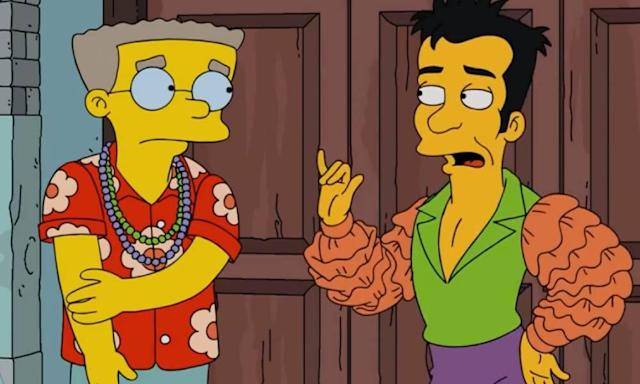 As ‘Yahoo! News’ report, Azaria said in 2020 that he would be stepping down from the role of Apu following the controversy. But his replacement has not yet been revealed. ‘The Simpsons’, however, has already recast the voice of the jolly, Black medic Dr Hibbert with Black actor Kevin Michael Richardson.

In the latest round of recasts, ‘The Simpsons’ has also recast the voice actor for the show’s iconic, gay character Julio. Azaria, who previously voiced Julio, was replaced by gay, Cuban-American actor Tony Rodríguez. He made his debut as the character in March during the 32nd season episode of ‘The Simpsons’ titled ‘Uncut Femmes’.

Julio is one of two gay men Homer Simpson, the patriarch of the titular Simpson family, moves in with in season 14’s “Three Gays of the Condo”. He has appeared in a multitude of ‘The Simpsons’ episodes as Marge Simpson’s hairdresser, as part of Springfield’s LGBT+ scene and even as the boyfriend of Mr Waylon Smithers.

In an ‘audition’ video posted on Instagram, Rodríguez shared his love for the iconic show, saying that he has been watching ‘The Simpsons’ “from the beginning”. He added that the characters, writing and performances on the show are “brilliant”, but he wanted to throw his hat in the ring to voice Julio.

“In the past two years, I have seen myself more in the show, and by that, I mean specifically the part of Julio, who is gay like me,” Rodríguez said. “He’s Cuban like me.”

He joked: “In one episode, he’s Puerto Rican, and I’m pretty sure I’ve had a Puerto Rican in me.”

Rodríguez ended the video by saying he knew ‘The Simpsons’ creators have tried to become more inclusive in their casting, and he offered his services to take on the iconic role of Julio – which he now does. So dreams do come true.

Matt Selman, an executive producer for ‘The Simpsons’, tweeted that a video of “Every LGBT Joke On the Simpsons Ever” – created by Drew Mackie and Glen Lakin of the ‘Gayest Episode Ever’ podcast – “had a hand” in recasting Rodríguez as Julio.

‘Gayest Episode Ever’ is a podcast that looks at and analyses the LGBT+ aspects of classic sitcoms. In this case, the two hosts focused on every LGBT+ joke ever on ‘The Simpsons’ from season one, which premiered in 1989, up to season 31 in 2019-2020.

Was Chandler From ‘Friends’ Meant To Be Gay?