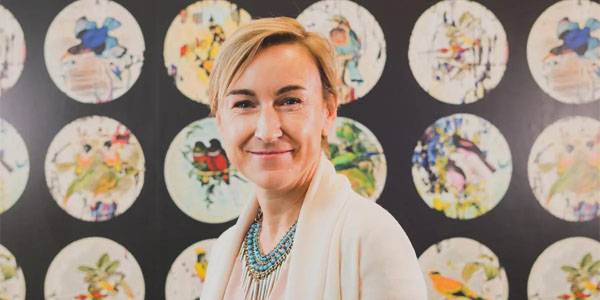 Lisa Moore's commitment to LGBTQ+ matters is evident not only through the work that she is doing with Yahoo’s LGBTQ+ employee resource group Prism, but externally too. As well as supporting her own son through his transition, she is actively involved as vice-chair of the board of the Hetrick Martin Institute, a non-profit organisation providing vital support services to young LGBTQ+ people in New York City and with a specific focus on mental health counselling. As a proud parent of an eighteen-year-old transgender man, Lisa’s first-hand experience of helping young LGBTQ+ people through the many challenges they face – particularly trans, non-binary and gender nonconforming youth – more than qualifies her for the role as Executive Sponsor of Prism. Of course, that’s in addition to her full-time role as Global Head of HR Business Partnering, Talent and People Operations role at Yahoo.

Lisa’s life at Yahoo began around seven years ago in 2014, when she joined AOL in London.  In early 2017, when AOL’s parent company Verizon bought Yahoo, she was offered her dream opportunity to move to the US to work on the merger of the two companies. She jumped at the chance, having worked in the HR and diversity, equity and inclusion (DE&I) space since the mid-1990s (in both the UK and Italy). Lisa’s career story includes a ten-year break to start a family and a two-year stint in Tokyo with her husband on an expat assignment.

“This time, rather than me following my husband’s job, my two teenage sons, husband and dog, followed me to New York,” recalls Lisa. As part of her remit, she’s also responsible for recruitment and learning and development, and her team numbers one hundred across seventeen countries, in addition to her work with Prism.

LGBTQ+ representation comes with different challenges as it’s often an after-thought, with “trans, gender nonconforming and non-binary people specifically being hugely overlooked,” highlights Lisa. “Society assumes that they’re taken care of within the LGBTQ+ acronym, but the ‘T’ in the LGBTQ+ community is, in many ways, considered as the second or even a third-class citizen. There’s some animosity within the letters that make up the group. Just the other day, my son pointed out that it’s taken him a while to realise: ‘the white cis-homosexual is not necessarily my friend and there’s no automatic affinity, sense of support or even solidarity there.’ Additionally, the focus on trans rights only moved into the spotlight in the last couple of years.”

Despite the many challenges faced by LGBTQ+ youth, one of Lisa’s missions is to help more marginalized groups, like trans people, find a pathway into employment. “Many trans people suffer from terrible mental health and homelessness after being ostracized from their families,” explains Lisa. “It has been shown that the earlier children can be accepted for who they are, the lower the chances of developing ill mental health and the lower the likelihood of self-harming or – in the worst case – attempts at suicide. We need to work with parents and schools to develop advocacy and create an environment where trans kids are not seen as freaks or something to be feared. If they are accepted by their families, they are more likely to remain in education, where they have the chance to go to college, get a job and lead fulfilling lives.”

It’s about speeding up education and awareness of the challenges that trans people face. “My hope is that we will create the conditions where we see trans and nonbinary people come into the workplace through college routes and through our regular intake of candidates,” Lisa adds. “But the reality right now is that many young people have been so damaged by their experiences, that the adjustment needed to come into a corporate situation is out of the question.”

Lisa believes it’s a question of time, investment and resources for attitudes towards trans people to change. “Education is key,” she stresses. “Unless you’re close to or know a trans person, then you’re unlikely to know what it means to have, say, body dysmorphia or to look completely different from the way you want to. Education is vital, especially in the workplace to create a welcoming and inclusive environment.”