McDonald’s has apologised to RuPaul’s Drag Race UK stars Ginny Lemon and Sister Sister after they were the only contestants from the second series – which ended on March 18 with Lawrence Chaney winning the competition – not to receive a free delivery on the night of the grand final.

Ginny wasn’t happy, and over the weekend she decided to try and right the wrong by calling out the fast food brand for the snub. She tweeted: “Righting more wrongs today me and @sistersisterhun were the only queens not to get a maccies from @McDonalds on the drag race finale night. [Both] Worcester and Liverpool do have maccies and as I have invested in ur fine business for years now I would like some answers? Plz Cher (sic)” 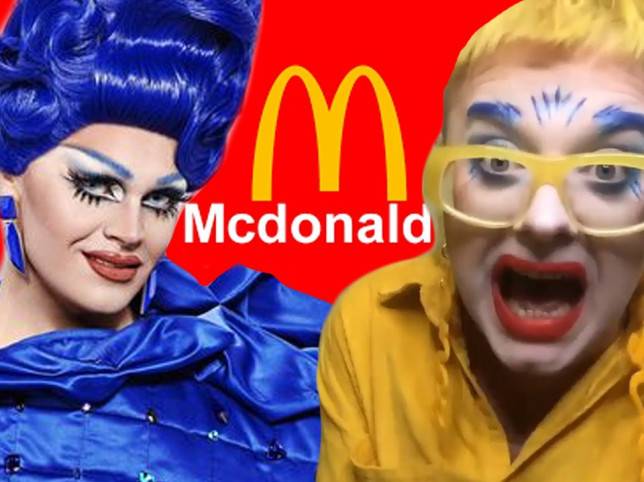 Sister Sister also weighed in, telling the official Maccies Twitter account that they had 24 hours to sort it out. It took a bit longer than that, but eventually they did get in touch and explained how they contacted the agents for every queen on the series.

In light of the mix up, McDonald’s still offered to make it right by sorting out some food for the two stars. The team replied: “Oh no! We’re sorry you didn’t get a McDelivery on the night – we reached out to the agents for all of the lovely UK queens. ‘Of course, we’d love to send you both a McDelivery so drop us a DM and we can get it sorted for you ASAP”. Meanwhile, Ginny recently hit out at Drag Race UK bosses after she tried to get involved in a talk hosted on Twitter spaces weeks after she quit the programme after landing in the bottom two.

In now-deleted tweets, she said: “Good morning to @dragraceukbbc thank you for blanking and ignoring me xoxoxo.” Venting their frustration in a series of posts, Ginny claimed: “Requested to talk with @dragraceukbbc on the Twitter talk, no response, emailed… no response! WHAT THE F**K IS GOING ON.” Ginny then accused bosses of making them feel like an ‘outcast’, as they added: “Thank you 2 @dragraceukbbc 4 inducing this panic attack. Ignoring me and making feel an outcast (once again). Hey GO F**K URSELFS (sic).” When a fan responded and said that the show ‘did want them in’ and had been talking about Ginny while live-streaming, Ginny responded: “I kept requesting and messaging but was being ignored.”

Another suggested it could have been down to technical difficulties, revealing that Irish actress Nicola Coughlan couldn’t be added to the chat, but Ginny claimed: “They were ignoring me before this went on Twitter today.”

Others revealed that those on the call had requested for Ginny to join and claimed Ginny had been introduced during the talk, but failed to show. A spokesperson for BBC told ‘metro.co.uk': “All of our series 2 queens were invited to join the Q&A however, there were technical difficulties which meant Ginny was unable to join which was mentioned during the live Q&A.”