Earth’s newest superman, Jon Kent, has been unveiled as bisexual in Superman: Son of Kal-El.

After months of speculation, the rumors have been proven to be true – Superman is bisexual! Shaking up the traditional narrative, the new line of comics will see the hero take a new direction.

On October 9, the life of Jon Kent, the Superman of Earth and son of Clark Kent and Lois Lane will take a whole new route.

“I’ve always said everyone needs heroes and everyone deserves to see themselves in their heroes, and I’m very grateful DC and Warner Bros. share this idea,” said writer Tom Taylor in a press release.

“Superman’s symbol has always stood for hope, for truth, and for justice. Today, that symbol represents something more. Today, more people can see themselves in the most powerful superhero in comics.”

In this new series, Jon Kent has, like his father, fallen for a reporter – but there’s a twist. Kent finds an endearing closeness with friend and reporter Jay Nakamura.

The pair become romantically involved in the new issue of the comic following a scene where Superman mentally and physically burns out from trying to save everyone that he can. And, with perfect timing, Jay is there to care for the Man of Steel. 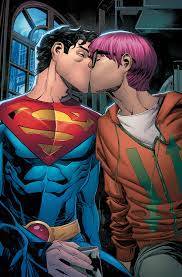 “I’m incredibly honored to be working beside Tom on the Superman: Son of Kal-El series showing Jon Kent tackling his complex modern life, while also saving the world from its greatest threats, villains and menaces,” said artist John Timms.

“We talk a lot about the power of the DC Multiverse in our storytelling and this is another incredible example. We can have Jon Kent exploring his identity in the comics as well as Jon Kent learning the secrets of his family on TV on Superman & Lois. They coexist in their own worlds and times, and our fans get to enjoy both simultaneously.”

In an official synopsis for the new book, Jon Kent is described as  “eager to follow in his dad’s footsteps” after gaining “powers and abilities far beyond those of mortal boys.”

This incredible news comes a week after DC announced that Tim Drake aka Robin was bisexual.

According to Gay Times, in the latest issue of Batman: Urban Legends #6 – written by Meghan Fitzmartin, illustrated Belén Ortega and supported by colorist Alejandro Sánchez – Drake opened up about his sexuality to his friend Bernard.

“Ever have a lightbulb moment? Like something out in the ether has been taunting you, teasing you,” he explained.

“Like you know you’re supposed to be on the same page as your brain but not everything made sense. People keep asking me what I want.

“But I couldn’t grasp it. Whatever it was. It always felt just out of reach. Until now. Until right now.”

Shortly after the news broke, Fitzmartin opened up about Drake’s journey and identity.

“I wanted to pay tribute to the fact that sexuality is a journey,” Fitzmartin said. “To be clear, his feelings for Stephanie have been/are 100% real, as are his feelings for Bernard. However, Tim is still figuring himself out. I don’t think he has the language for it all … yet.”

Robin Comes Out As Bisexual In New Batman Comic